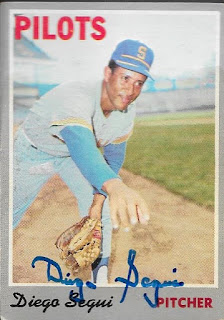 If the surname looks familiar, it is because a few days ago I reported a TTM success from another Segui, David, who is the son of today's success.  I got this 1970 Topps back from Diego Segui after I decided to try to get a couple Seattle Pilots cards signed.  This one was a beat up old card, but it still turned out nice.  It is especially great since you can see the Pilots hat and uniform very well in this card.