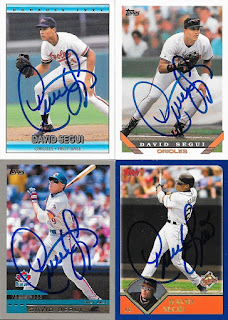 He has a nice signature, but he is still one of my least favorite Orioles of all time.  I figured I would add David Segui to my TTM project and I'm happy I did so.  He did keep two of the cards I sent and the fact that they were the best of all of what I sent, I was a little annoyed at him.  Not as much as I was when I learned in 2005 that he contributed to Larry Bigbie's and Brian Roberts's dip into steroids (via the Mitchell Report).  However, time has kind of healed the wound, and Segui was a pretty good player for the O's during some dark times.