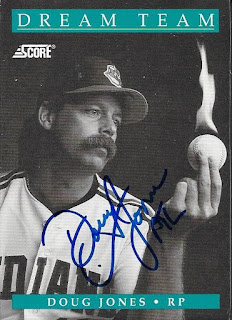 I got back one of the best TTM successes in a while when I received 7 signed cards from former pitcher, Doug Jones.  When I started doing TTMs and was looking for guys to send to, I saw that Jones signed.  So, I had to get a copy of this 1991 Score Dream Team to send along with whatever else I could find.  I actually bought two of these and sent one to my good friend, Andrew.  I am so glad I got this back because it looks awesome signed.

Here are the other cards I got signed by Jones.  The 1993 Flair turned out great.  Those cards really are some nice offerings from the mid-90s.  They look even better signed.  I was able to add a couple cards of Jones as an Oriole, so that was nice as well.  The top left card is an extra that he threw in and has a religious testimonial on the back.  He inscribed each card with "PTL" which means "Praise the Lord".  I thought this was a nice touch.