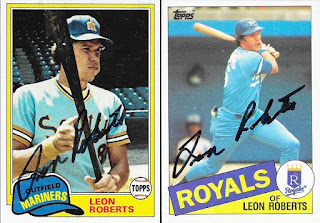 I got a couple nice 80s cards signed by former player, Leon Roberts.  Both of the cards turned out great.  I really liked the 1981 Topps (on the left), since it had the really old Mariners jersey.  The 1985 looks ok, but the Royals jersey kind of blends into the background a bit too much.

I mailed to Roberts on April 30 and got the cards back on May 9 for a 9-day TAT.
Posted by William Regenthal at 10:02 PM