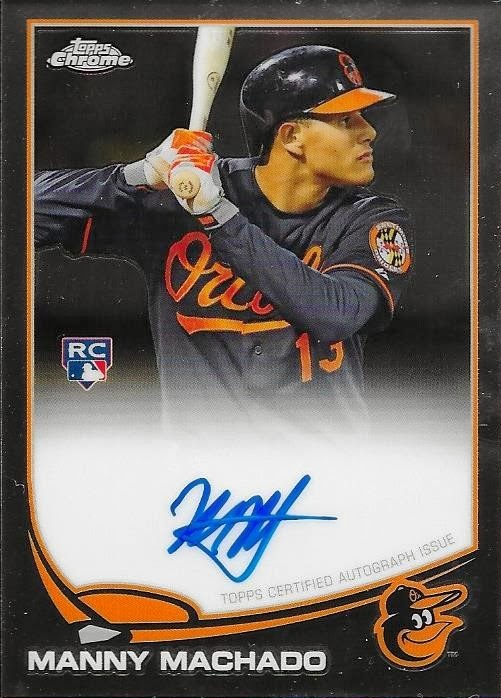 I got an email from someone who has read my blog for a long time, Dana.  She used to frequent the card shop I helped out at and follows me on Facebook as well.  When she emailed me, I was happily surprised that the had contacted me to do a trade.  Braves stuff for Orioles stuff with the centerpiece being the above 2013 Topps Chrome Manny Machado RC Autograph.

I sent Dana a multitude of Braves stuff, including a SP and a relic from 2014 Topps, among other things. She sent a huge stack of recent Orioles stuff, way too much to justice with in one post.  So, I will break it up among many posts.

I thought the other day that I really needed to get something cooking as far as trades go, and lo and behold, a huge package from Dana and also several other trades came rolling in all at once.  I'm going to make time for each and every one, so if you sent me something, don't worry, it'll get posted.  Hopefully sooner rather than later.  I also want to take Fuji's idea and do a posting showing my top 5 Hall of Fame baseballs.  I haven't thought enough about it, but I will get one moving shortly.

So, that being said, please enjoy the Manny RC Auto that Dana sent me and stay tuned over the next couple days and see what else was in her padded mailer!

Thanks so much, Dana!
Posted by William Regenthal at 10:10 PM