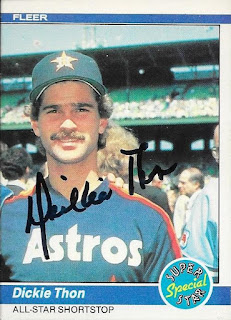 Dickie Thon signs through PastPros, so I figured it would be pretty easy to get my 1987 Topps signed by him.  I went through PastPros' steps back in November, sent my card in and waited.  I waited so long, I had forgotten about it, but when cleaning out my email, I saw the receipt from PastPros, and that it should take no longer than a month to get my card back.  I emailed them, and they said they would look into it.  I waited and forgot again, and when I was missing another player (Eric Plunk), I remembered that I needed to look for this one again.

Finally, I got a message from PastPros that Dickie had never received my 87 Topps, and would sign and send me one of his own.  THEN they message me again saying he didn't have any 87s, but he would send me something else.  I got this 1984 Fleer All Star card.  In the email, PastPros told me to re-send an 87, and Thon would sign that for me, as well.  So, I did, and got that signed card back in about a week. 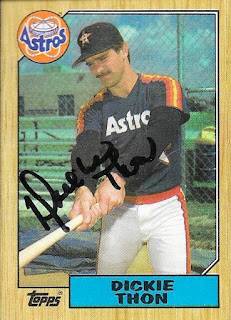 I'm glad to have gotten my card back.  I have no idea what happened to the other one, but I can mark him off of my checklist, and all is well.