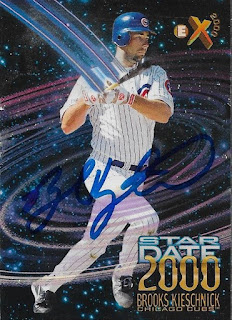 I have a little bag of failed TTMs that sits beside my desk.  I check it periodically to see if a new address pops up for one of the failures, and have been able to thin the pile down here and there.  One of the players who sat in that bag for almost 3 years was Brooks Kieschnick.  I had some really awesome cards to send him, and originally sent three out in 2016.  They were RTS, so they sat and waited.

Recently, I checked on some of the envelopes, and saw that Kieschnick was signing at a new address, this time for a fee of $10.00/card.  Since the third card wasn't anything special, I sent the other two, along with a $20, and hopes the cards would come back signed this time.

The cards did come back, and I believe they might be some of the coolest cards that I have ever gotten returned.  The above Star Date 2000 from EX 2000 looks amazing.  I was so happy that this one came back signed, and turned out well.  I had prepped it beforehand, and I'm happy I did.  This card just looks awesome. 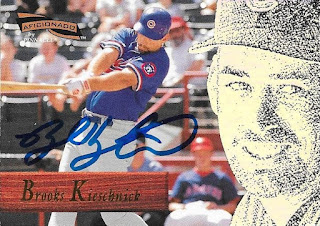 The other card I sent was a 1996 Pinnacle Aficionado.  This has to be one of my all-time favorite sets.  The cards are tough to find, and feature a nice wood-grain nameplate, and the player's face in a stippling design.  When I took art classes way back when, that was my favorite form of artistic media.  I always enjoyed stippling via pen and ink, but it was so time consuming.