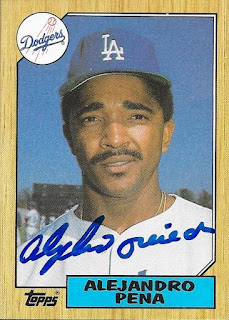 Another SCN private signing has helped me land another autograph for my 1987 Topps set.  I had sent to Alejandro Pena a while back, and never got a return, so I went ahead and took advantage of the low fee for this signing, and crossed the card off of my list.

I mailed to the signing on September 14 and got the card back signed on October 5, for a 21-day TAT.
Posted by William Regenthal at 5:41 PM