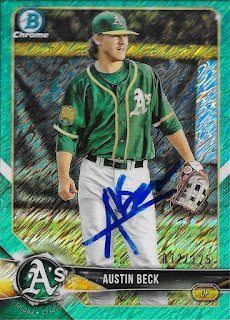 I got a DM on Instagram earlier this season from a guy in California who watched me bust my 2019 Pro Debut boxes on my livestream.  He took a couple cards of a guy in that set, and got a 50/50 done for me.  He, then, offered to get me some cards signed by some of the guys in the California League (mostly), so I sent a bunch of cards his way.

He was only able to get a few of the cards done for me, but it was definitely quality over quantity.  He pushed the above Austin Beck shimmer refractor to the front of the line when I was able to cross JP Martinez off of his want list for his 2019 Pro Debut set.  The Beck turned out great, and I was super excited to get it back signed. 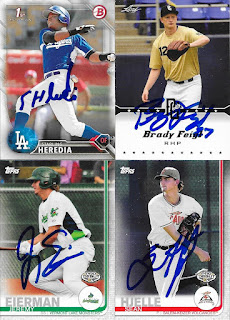 These 4 cards were the only other ones that he was able to get done for me.  I was disappointed, mainly because he had promised to get a Heliot Ramos done for me, but it didn't get signed, and didn't even make it back in the package.  My feelings aren't really hurt by that or anything, because stuff happens, but the thing I dislike the most is spending a ton of time searching for cards, then having to go and put it all back in the box.