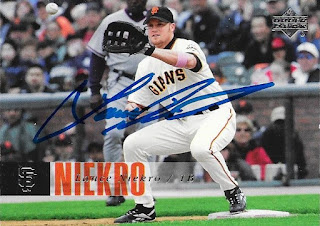 I have been working non-stop lately to repopulate my TTM box, and I feel like I have found a ton of guys that I can send cards to.  One of them was former Giant, Lance Niekro.  I got three cards signed, and they all were sets that I don't have many cards of.

The above 2006 Upper Deck looks really cool.  I don't have much at all from this set, and I am glad that I sent this one in. 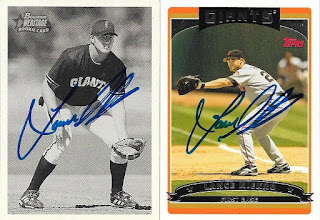 I found the above 2001 Bowman Heritage at my LCS.  The period of 1997 to 2003 holds a ton of stuff that I never opened.  I was out of the collecting game, and missed out on some gems.  The card looks awesome, and I was super excited to find it at the shop.

Of course, I had to get a Topps base card in there, and 2006 Topps is one set that I have very little of, as far as bulk cards are concerned.  I had a box of them that turned over and fell out of my truck in my move, and the cards ended up in the gutter just after a rainstorm.  Needless to say, most of the cards were ruined.

I mailed to Niekro on September 30 and got the cards back on October 8, for an 8-day TAT.
Posted by William Regenthal at 6:10 PM