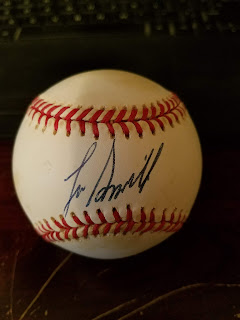 My good friend, Nate, sent me this Lee Smith signed baseball for my birthday.  I really appreciated him sending me something I could cross off of my Hall of Fame checklist.  The bad thing is, I could have sworn that I already had Smith, but apparently, I did not.  I had to search this blog and my baseball collection to confirm.

Smith was elected to the Hall of Fame by the veterans committee for induction in 2019.

Lee Smith is my 146th Hall of Famer.  Thanks for the ball, Nate!
Posted by William Regenthal at 5:52 PM