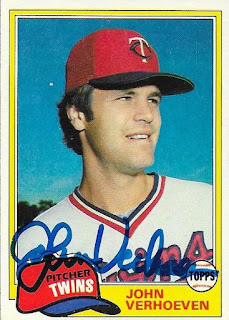 I think 1981 Topps cards look pretty awesome when signed.  The above John Verhoeven that I received signed through a TTM success really looks good.  There's something about how the colors on the card look that really pops.

If I weren't working on the 1987 Topps set, I would have probably gona after the 1981 set, but I had a billion 87s, and it was only natural to choose and go for that one, instead. 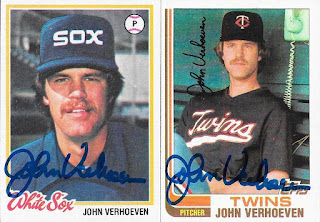 The late 70s trucker hat that Verhoeven is wearing in the 1978 Topps card (left) really stands out on that card.  The 1982 set isn't usually one of my first choices to send out, for some reason, but this card looks nice.

I mailed to Verhoeven on September 24 and got the cards back on October 4, for a 10-day TAT.
Posted by William Regenthal at 3:50 PM