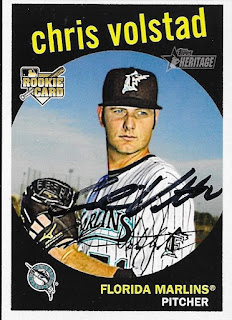 I have been working on finding some guys who sign TTM from the mid-to-late 2000s, so I can move some of those cards out of my boxes.  I found a handful of guys, and sent out a ton of cards.  I was glad to get these cards back from former pitcher, Chris Volstad.

The above 2008 Topps Heritage rookie card looks pretty great.  I love the 1959 Topps design, and this one looks good.  The only thing that could make it better would have been a higher quality Sharpie. 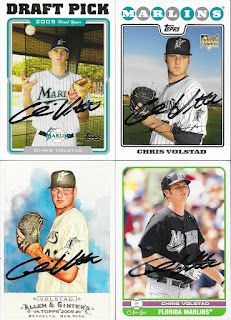 I mailed to Volstad on September 30 and got the cards back on October 8, for an 8-day TAT.

With these five cards being added to my album, I have now filled 11 albums with autographed baseball cards.  Not too bad, since I started the albums in 2016.  Additionally, that does not include my signed 1987 Topps album.
Posted by William Regenthal at 6:08 PM