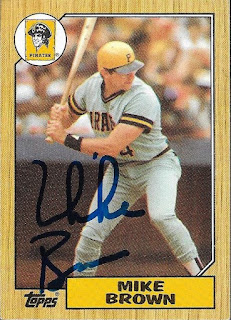 I took some time and went through the 1987 checklist again and compared it to recent TTM successes.  I do this once in a while, and it helps me pull guys that are currently signing.  This time around, I was able to pull maybe 10 guys that didn't seem to be actively signing before.

I pulled this Mike Brown card and saw that there was another Mike Brown who was linked to the checklist that wasn't actively signing.  THIS Mike Brown was, I found, once I did a search on the name and figured out it was this guy.  So, I mailed the card off and got it back pretty quickly.