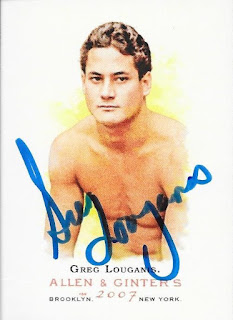 My mom gave me a bag of oddball card packs that she found at Goodwill a while back.  In the bag were several packs of US Olympic Hall of Fame cards.  I had seen that Greg Louganis signed TTM, and since I pulled one of his cards from one of the packs, I decided to send to him.

I waited a bit, though, because I knew he was in 2007 Allen & Ginter, as well, so once I got around to looking through my boxes, I found his 07 Ginter and sent the two cards out. 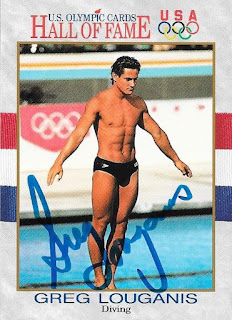 Louganis (b. 1960) is widely considered one of the greatest (if not THE greatest) divers of all time.  He won Gold in the 1984 and 1988 Olympics.  The events he won Gold in were (for both olympics) 3m Springboard and 10m platform.  He also won Silver in the 1976 Olympic Games 10m platform event.

In Seoul in 1988, Louganis hit his head on a board while performing a dive in a preliminary round and suffered a concussion.  He would come back from that injury and score the Gold, anyway.

Louganis attended the University of Miami, but transferred to UC-Irvine and graduated in 1983 with a major in theatre and a minor in dance.  He probably transferred out of Miami because their football team isn't all that great.

I mailed to Louganis on October 2 and got the cards back on October 11, for a 9-day TAT.
Posted by William Regenthal at 6:22 PM

Your momma is good at oddball stuff!