Some More Autos From Jackson T. 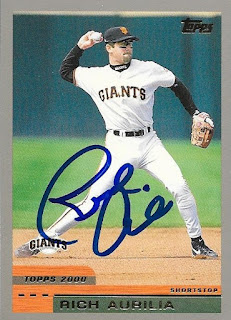 I got another package in today from my friend, Jackson T., who formerly lived in Arizona, but is now back in Chicago.  He had gotten a box of cards off of me last year and tried to get as many cards as he could signed for me.

He sent another batch back today.  The above 2000 Rich Aurilia turned out really well.  I don't have very many cards from 2000 signed, so this one will look good in my album. 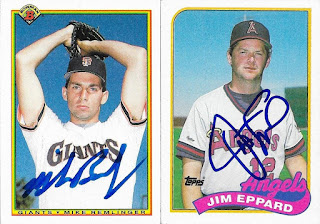 He helped me get some random stuff out of my boxes, like the 1990 Bowman Mike Remlinger.  I had a ton of those 90 Bowmans, and it was really rewarding to let some of them go, and clear out some room for other cards.  Same goes with the 1989 Topps Jim Eppard.

Best of all, though, Jackson knocked three more cards off of my 1987 set.  The Ed Lynch was really tough, since Jackson lost the card I sent him, sent me a signed 1987 Topps Tiffany, then I had to raid my completed set to find another Lynch in time for him to get it signed.  He was able to, and the card is now in my album.

Joe Price and Mike Moore are fairly tough, as well, but Jackson got them taken care of.  He also sent me a signed Tom Hume, but I had already gotten him; he also sent me a signed 1987 Topps Giants Leaders card signed by Jim Gott, but he apparently isn't on the card.  It is Jim Barr, and I have a card out to him to be signed right now.

Thanks so much for the autos, Jackson!
Posted by William Regenthal at 10:30 PM