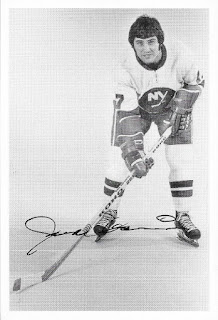 I have gotten almost all of the hockey guys back that I initially sent off when I got my box of vintage hockey from my buddy, Max.  I think I have one more out pending.  I really liked this success from Jude Drouin, because he was kind enough to send the above photo.  I always like it when players include their own stuff in a TTM request.

I mailed to Drouin on August 22 and got the cards back on September 23, for a 32-day TAT.
Posted by William Regenthal at 4:50 PM