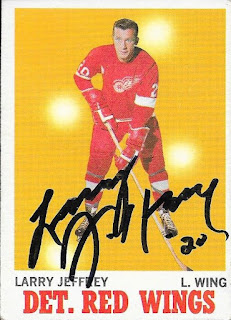 Here is another of the vintage hockey cards that I was able to get signed TTM.  This is a 1970-1971 Topps card of former Red Wing, Larry Jeffrey.

The card turned out pretty sharp.  I especially liked it because it was a Red Wing.  I may or may not have heard of the hockey team from Detroit once or twice.

I had ordered a book of Canada-to-US stamps online, and bought some US-to-Canada stamps at my local post office.  Those have helped me expand my TTM requests a bit.  I hope the 5 people who read this blog have enjoyed the small change of pace.
Posted by William Regenthal at 10:39 PM