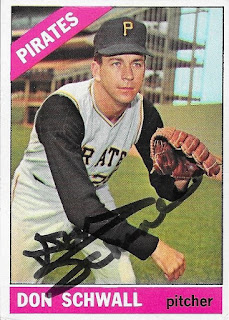 I had this 1966 Topps card of Don Schwall in my vintage box that I finally got around to sending TTM.  The card turned out well, and I was glad to get it signed.

I mailed to Schwall on September 26 and got the card back on October 5, for a 9-day TAT.
Posted by William Regenthal at 10:19 AM