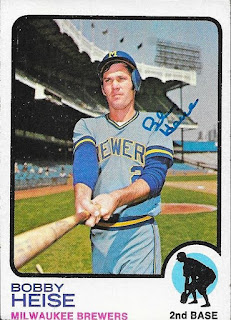 I added some mid-70s cards to my album with this TTM success from Bobby Heise.  Heise wins the award for the World's Smallest Autograph.  I had to do a double-take to make sure he had even signed the cards. 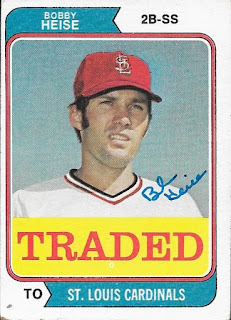 This 1974 Topps Traded came out of the vintage box that I bought off of Max at the National.  It wasn't just hockey cards in the box.

I mailed to Heise on September 23 and got the cards back on October 3, for a 10-day TAT.
Posted by William Regenthal at 6:05 PM