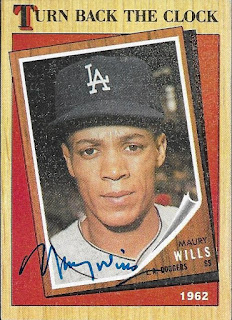 It took me three tries, but I finally got a TTM success from Maury Wills.  I tried him last year, but had a bad address.  Then I sent to him in November, but got no return, so I took advantage of a Sportscollectors.net private signing and got this 1987 Topps taken care of.

Originally, I had one with me at the 2015 National Card Show, but was only able to get Wills on a baseball.  I had planned to go back through his line, but the power went out, then they weren't taking any wild cards for him.  So, I am really glad that I finally was able to get this done.  I have one other Wills card that I want to try to get done, so I have to hope another private signing comes along.

I mailed to the private signing on February 12 and got the card back on March 6, for a 24-day TAT.  I paid a fee of $10.00 for the signing.  I still have the cards I sent to him in November, along with $20 cash, so hopefully those come back soon.
Posted by William Regenthal at 6:00 AM