Don't ask what the F stands for...  This was a really good TTM success that brought a few autos of a Yankee legend.  I paid $5/card, but got some really good ones in return from Bucky Dent.  This 1978 Topps turned out really nice. 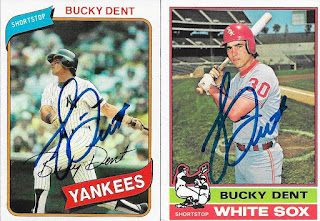 Dent is most known for a game winning home run in a tie-breaker game at the end of the 1978 season that sent the Red Sox home and the Yankees to the playoffs.  He was given a certain middle name (F.) by Red Sox fans after that home run.