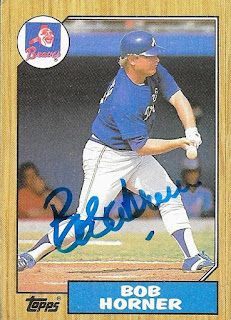 I thought I had sent to Bob Horner before, but after digging into my blog, and my albums, it appears that I was mistaken.  No worries, though, as I did send to him, and received this TTM success.  I had to get him on a 1987 Topps, of course, which looks really nice. 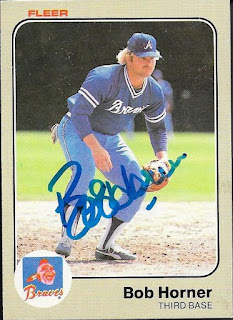 I also decided to add this 1983 Fleer.  I don't have many of these at all, so I figured I would go ahead and put this in the TTM request.  1983 Fleer is a pretty basic design, but a pretty decent card.  Sometimes the simplicity is good.

I mailed to Horner on February 24 and got the cards back on March 5, for a 9-day TAT.
Posted by William Regenthal at 8:46 AM