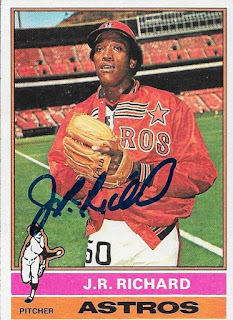 I had a couple TTM successes come in all together from some pretty big names.  This success from J. R. Richard was one that I was really excited about.  He signs through PastPros for $10.00/card and a handling fee of $3.00.  I figured that was a pretty good deal.  I really enjoyed this 1976 Topps with the old 70s satin jacket and retro Astros logo.  I had to make sure this one was one of the cards I sent out. 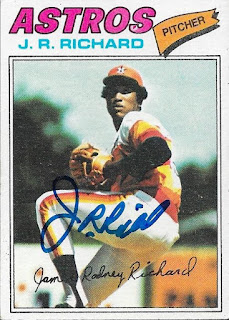 This 1977 Topps also shows off some amazing Astros gear.  They had some of the best jerseys, and it is definitely captured on this card.

Richard (b. 1950) played in the majors from 1971 to 1980 for the Astros.  For a brief period of time, he was one of the best pitchers in the game, then, just like that, his career was over.  On June 30, 1980, Richard collapsed on the field while he was playing catch.  He was rushed to the hospital where emergency surgery was performed to remove a blood clot in his neck.  Richard tried to make it back to the majors for several years, but the stroke caused too much damage.

Following his playing career, Richard had numerous failed business deals, and was twice divorced.  He was left homeless in 1994.  He wound up finding Christ and became a Christian minister, thus turning his life around.