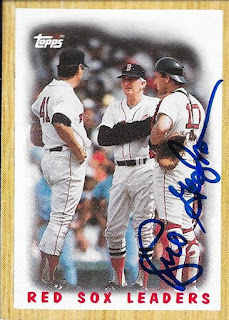 As I sit here and prep my auto book for the 2018 season, I wanted to get the cards that my good friend, Gerard, had signed for me at Spring Training into my album.  He helped knock a 1987 Topps off of my checklist with Rich Gedman's signature on this Red Sox Leaders card. 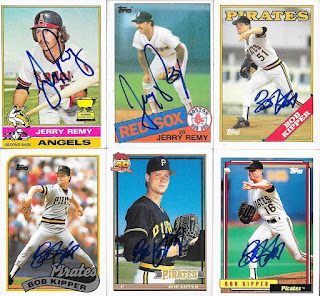 Gerard got two Jerry Remy for me, and a ton of Bob Kipper.

I was really surprised he got Logan Morrison for me.  I had two different 2007 Topps signed by Dave Bush.

The 2017 Topps Pro Debuts were nice.  I have a ton of those, so it was nice to be able to send some out for signatures.

I was really happy that Gerard got a couple Turkey Red cards signed.  I have been wanting to add them to my album, and now I have a couple.  The black Rocco Baldelli really turned out nicely. 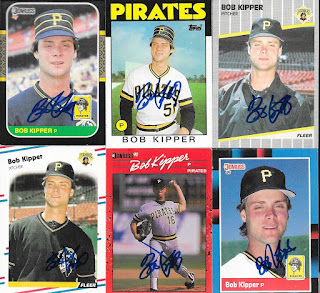 These Bob Kippers are non-Topps base cards.  The 1986 Topps is a Topps Traded.

Gerard got me a Paul Abbott.  I had tried to get him when he was with Salem Red Sox, but he wasn't signing for anyone that day. 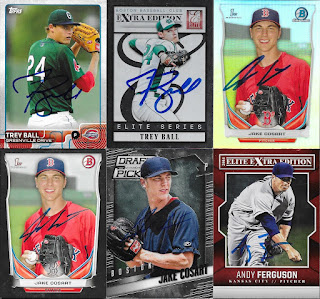 I think I sent Gerard some of these Red Sox prospects.  Some others came from his own collection.  He is really generous with his cards, so I definitely appreciate it. 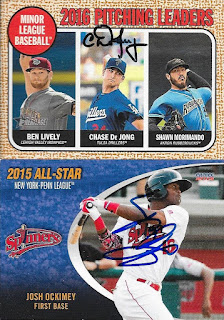 I had this Josh Ockimey from the MY-Penn Leage All Stars.  It turned out really well. 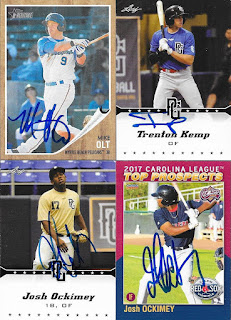 I provided the 2013 Leaf Perfect Game cards, which came from the 2017 National.  I was really happy to see the Carolina League Prospects card of Ockimey come back signed, as well.  The Heritage Olt was a dime-box find from the National. 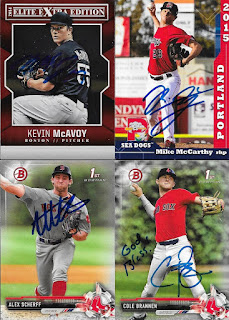 Here are some more prospect cards that Gerard hooked me up with. 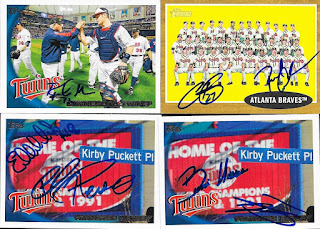 Finally, Gerard got some signatures using some team cards out of various Topps sets.  These cards really come in handy when you have no other cards of someone.  He got me: Ryan LaMarre, Eddie Guardado, Chrs Heisey, Wynston Sawyer, Brian Novieto, Christian Colon, Josh Smith, Shane Carle, Jason Hursch, Adeiny Hechavarria, Dave O'Brien and Sherten Apostel. 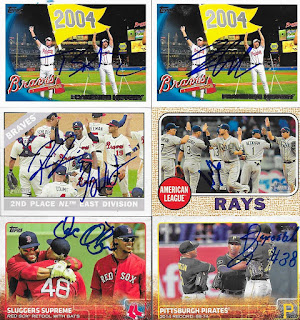 Thank you so much for getting these cards signed for me, Gerard!  We will be doing a ton more 50/50s this season, and I really look forward to it.
Posted by William Regenthal at 2:36 PM