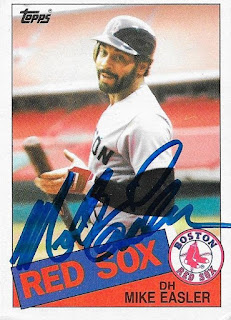 Here is another TTM success that took me a long time to send, and a long time to post.  I sat on my Mike Easler cards for a while, just because I seemed to have other guys ahead of him all of the time.  I finally got around to getting his cards out, and I also knocked a card off of my 1987 Topps checklist.  The above 1985 Topps really turned out nice, I think.