I Finally Met Cal and Eddie 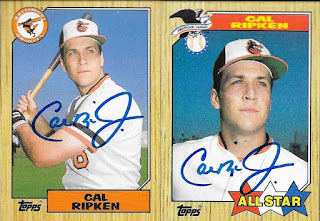 Well, if I wasn't fully committed to trying to get as complete as I can with the 1987 Topps set, I probably am now.  I went ahead and dropped some serious money on the set this past weekend when I got the chance to meet Cal Ripken and Eddie Murray.

My good friend, Ryan (from the blog - O No Another Oriole Blog), and I decided back in January during Fan Fest that we would try to go to the Chantilly show in April to try to see if we could meet Chipper Jones.  Yeah, we didn't get Chipper, since he was Sunday, I think, but we decided we would meet Eddie Murray.  I got to thinking about it, and I decided that this would be as good a time as any to dip into savings and go ahead and try to knock Cal's cards off of my checklist as well.

I'm really glad I went ahead and did it, because the cards look ridiculously amazing.  I actually bought his base 1987 Topps off of COMC, since I didn't have any in my 1987 box.  I think they got pulled and added to the Cal PC, and that box was buried somewhere in my collection.  I had plenty of his All Star card to go around, so that one was released from my box and is now moved into my album.

As you can see, Cal took his time making sure that the auto was perfect.  I am so happy with how the cards turned out. 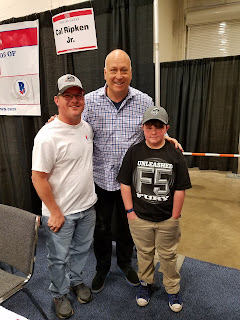 Meeting Cal at a show carries some added benefits.  He takes his time making sure you have a stellar autograph, and he also takes the time to step aside and snap a photo with you. 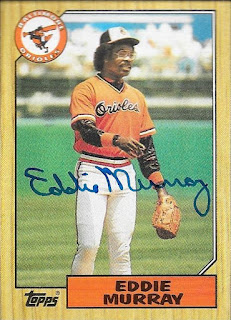 I only paid for one voucher for Eddie Murray, so my son Chris could walk around the show.  He ended up catching up with Ryan and I met another Orioles icon.  Eddie signed my card with a blue Staedtler (as opposed to the blue Sharpie Cal used), and the auto turned out great as well. 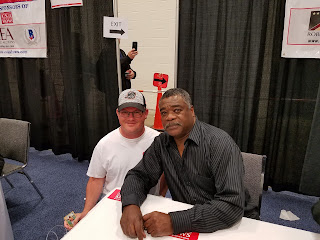 Eddie looked up from signing my card and did a double take at my hat.  I explained that it was a Down East Wood Ducks hat, and where they came from.  He thought that was pretty cool, and agreed to pose for a photo.  He was also super nice, and is a very big man.

Something I didn't realize until I got home on Sunday was that when I collected Eddie's signature on my 1987 Topps, it became my 200th signed card from the set.  I definitely didn't plan it that way, but it was pretty cool that it ended up being number 200.
Posted by William Regenthal at 8:59 PM