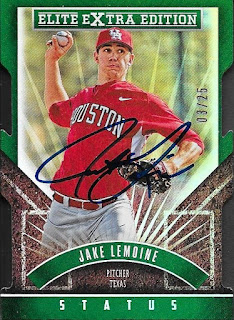 A new season is upon us, and I had the opportunity to see the new-look Wood Ducks take on Mount Olive University last night in an exhibition game.  Last season, the exhibition game rained out.  Last night started off warm, but the temperature dropped and the wind picked up.  I had to go to the team store and buy a hoodie because I left mine at home.

I was really excited about this season's roster because there are a bunch of Rangers prospects who came up to start the season.  Jake Lemoine is one who made the jump from Hickory.  I got the above 2015 Elite Extra Edition die cut numbered to 25 signed. 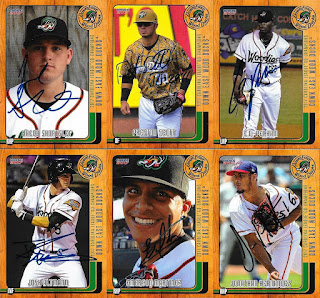 There are a few holdovers from last season's Carolina League Co-Champions.  I was able to get 6 cards from the team set signed.  Emerson Martinez was really happy to see Chris last night.  He even "signed" Chris's nose during the post-game autograph session. 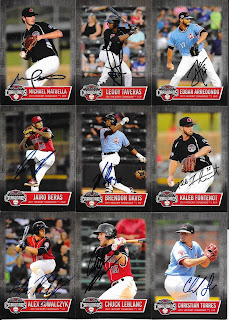 I had purchased the late edition of the 2017 Hickory team set, as I knew a lot of those guys would be on the Wood Ducks roster this season.  I knocked out a bunch of them last night. 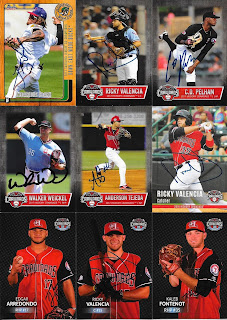 Three of the early 2017 Hickory set got signed, as did one from the 2016 set.  I don't have many of the 16s remaining who are still with the Rangers. 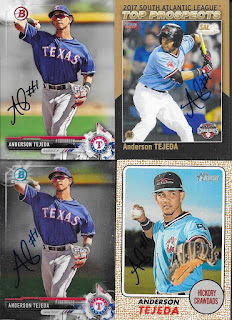 Anderson Tejeda is one of the higher Rangers prospects on the Wood Ducks this season.  I was able to get my South Atlantic League card taken care of, which helped with that set. 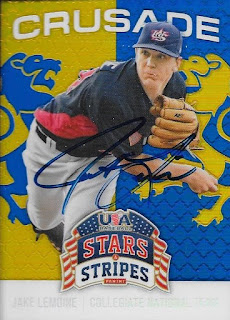 This Jake Lemoine Stars and Stripes Crusade insert turned out really nicely.  I had hoped to add a few cards from that series to the album, and Lemoine turns out to be the first. 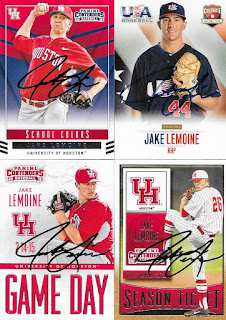 I picked up a bunch of Panini Contenders cards from my LCS, and took care of several last night.  I especially like the School Colors versions; they look really cool signed. 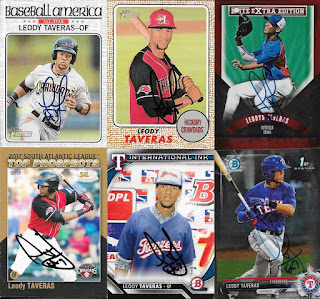 Leody Taveras is another high-end prospect who will be in Kinston this year.  He signs two per, but I had help last night, and he signed everything I had during the post-game autograph session. 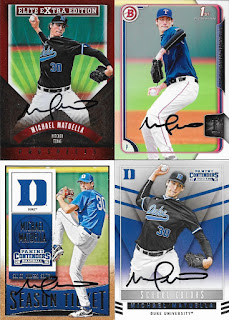 I know some folks will enjoy the Panini Contenders cards of Michael Matuella, since he played for Duke. 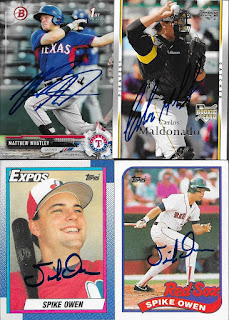 Spike Owen only signed pre-game, and only signed 2-per.  He most likely will be like Howard Johnson was last season; so it will take me a while to knock out everything I have for him.  Carlos Maldonado has a few nice cards, but the only one I had in my collection as of last night was the 2007 Upper Deck.  I believe I ordered some of his stuff off of Sportlots.

Also, Matthew Whatley is one of the Rangers newest prospects.  He was drafted last June, and is already at High A.  He completely bypassed A ball (Hickory). 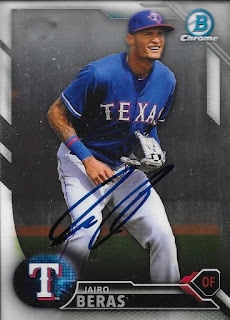 Finally, Jairo Beras is back with the Wood Ducks to continue his transformation into a pitcher.  He was demoted to Hickory last season to work on transitioning to a pitcher.  I'm interested in seeing his progress this season. 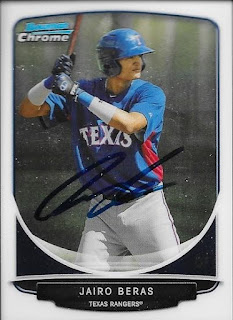 I had some help getting autographs last night, my brother Andy, his fiancee Camryn and my son Chris all helped out.