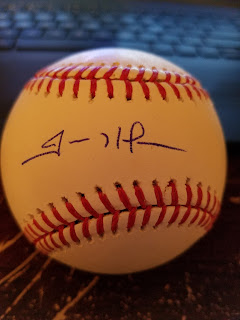 Surprisingly, I haven't been very active in adding to my Hall of Fame signed baseball collection lately.  I added a few new guys by default in January when the Hall of Fame election results were announced.  Other than that, I haven't sought out anyone, and definitely haven't purchased any.

When my good friend, Max, came along and asked me if I would be interested in making a deal with him for some baseballs, I listened.  I sent him a few signed balls and in return, I landed three big names, one of which is Hall of Famer, Trevor Hoffman.

Hoffman is now my 138th Hall of Famer on a baseball.  Thanks for the deal, Max!
Posted by William Regenthal at 10:18 PM