Graphing The Wood Ducks vs A Stacked Dash Squad 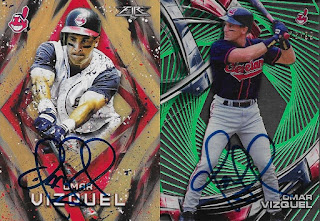 Whatever bubonic plague I was suffering from on Monday wasn't going to keep me from my goal of graphing the Winston-Salem Dash when they came to town.  This is the team that I was most looking forward to seeing this season, mostly because of their manager.  Future Hall of Famer, Omar Vizquel was named the manager of the Dash during the off-season, and I had to make sure that I got him on a baseball.

Because I was pushing for the ball, I couldn't present my book for him to sign as well, but luckily, CHris made sure he signed my two best cards.  I found both of these cards at the Chantilly show, and was so glad they turned out well.  I had bought a pack of Steadtler pens for the Bowman Hi Tex, but they didn't get here in time.  The blue Sharpie worked just fine, and I was really happy Chris thought to make sure those were the two he signed. 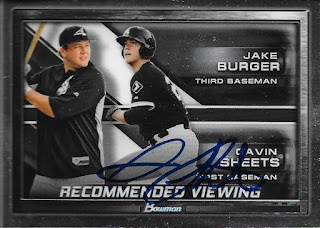 An unexpected highlight of the night was that White Sox prospect, Gavin Sheets, wasn't in the lineup.  So, while the game was going on, he had to wait by the fence to come onto the field.  While he was waiting, I chatted with him for a bit about his being in Winston.  He actually attended Wake Forest University, so it was a bit of a homecoming for him.  Sheets was really nice, and friendly.  He came back by at the end of the game and signed for us.

I had gotten Dylan Cease before, when I was at Andrew's last season.  He was with South Bend, and was traded.  He signed 2 per for us.  I really was glad to get a 2013 Perfect Game card out of my box.  I'll be sitting on a ton of those for a while, I think.

Micker Adolfo doesn't have much of a signature, but I was able to get him taken care of.  I also used up another card from my 2017 Carolina League Top Prospects set. 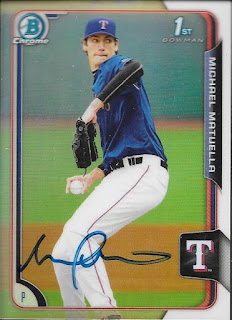 I finished off all of the Michael Matuellas that I had, which was nice. 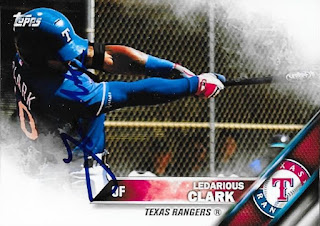 I also took some custom cards in a 50/50, and they turned out great.  This Ledarious Clark might be my favorite of the bunch. 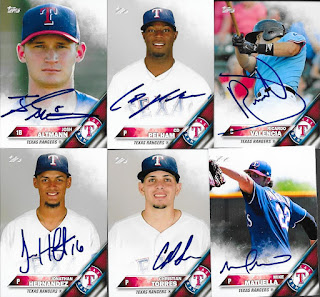 I got a good many of the customs done, but the other guy ended up with more (the guys who don't sign duplicates like Taveras).  I'll have a few to work on for a while.

In this series, I missed out on Dane Dunning and Blake Rutherford.  I wanted to catch a second game, but due to being sick, I decided I would stay home, get better and try again another time. 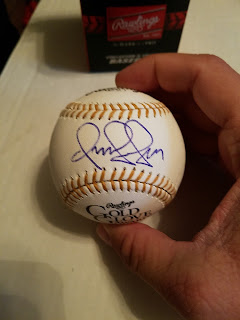 And I got a Gold Glove Award ROMLB signed by Vizquel.
Posted by William Regenthal at 6:00 AM