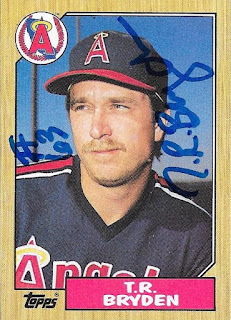 Another 1987 Topps knocked off of my list due to a TTM.  I received a TTM success from T. R. Bryden that turned out well.  He signed in blue Sharpie and inscribed his jersey number.

I mailed to Bryden on March 5 and got the card back on March 12, for a 7-day TAT.
Posted by William Regenthal at 5:44 PM