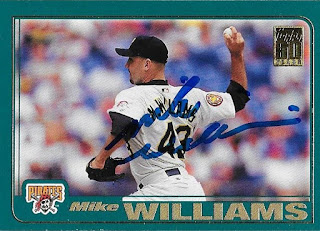 Here is a signed 2001 Topps that originally came out of the box that I got while I was at Andrew's last year.  Mike Williams is a strict one per, but I sent two cards anyway.  He kept my 2003 Topps that I sent.  Oh well, I was just glad to get an early 2000s card in.

I mailed to Williams on February 5 and got the card back on March 7, for a 30-day TAT.
Posted by William Regenthal at 5:37 PM