Another TTM Success From Danny Darwin 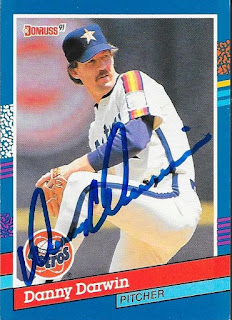 Because I missed sending him a 1987 Topps the first time I sent TTM to Danny Darwin, I had to mail to him again.  I had a few other cards sitting around, so I included them in the TTM request.  I probably wouldn't put a 1991 Donruss in a TTM request to anyone, but I wanted to add one to the album here.  There isn't anything wrong with these cards, they just aren't usually the first choices I send along.  Really, I like the design, as it reminds me of when I first got into collecting.  It's very "Saved by the Bell" if you really look at it.

I was able to get a 1987 Topps done, as well as a checklist.  I also included a 1988 Fleer since the red, white and blue design is pretty sharp.