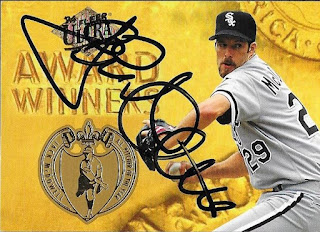 I opened up my mailbox a few days ago and was happy to see one of my envelopes in there from a TTM.  I haven't gotten nearly as many as I had earlier in the year.  This, however, has been by design.  I have learned that TTMs are a great winter hobby that can keep me busy while waiting for the season to start.  I have sent out a few this past week, just to get a few things off of my desk. 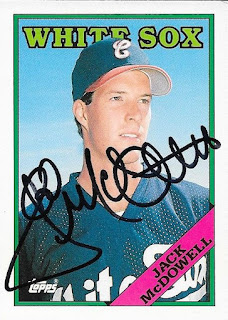 This return from Jack McDowell has reignited my interest in TTMs, though, because the cards I got back all turned out great.  The top card from 1994 Fleer Ultra looks great, as does the above 1988 Topps Traded.  The below 1993 Flair is from one of my favorite brands to get signed.  Also, I really like the mid-to-late 1990s Fleer because of the matte finish.  Autos really show up nicely on those as well. 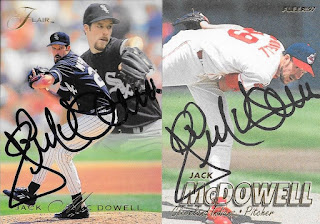 I mailed the four cards to McDowell on March 4 and got the cards back on September 24 for a 204-day TAT.
Posted by William Regenthal at 11:29 PM