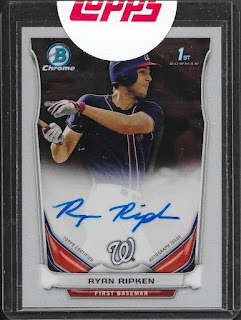 At the time I picked this card up at the National, I was excited.  I saw it in a vendor's showcase and immediately paid his price of $20 for this card and went about my business.  Unfortunately, for me, I probably should have looked a little bit longer while I was there, because on the last day of the show, I saw two of these in a bargain box for $4 a piece.  Dang.  I'm sure that the vendor I got this from saw my Orioles gear and figured he had a sucker.  Oh well.  $20 isn't a bad price to pay when you consider that my goal has been to get Ryan Ripken's autograph so that I can say that I have three generations of Ripken autos (and Bill, as well).

I really want Ryan on a baseball, but at this point, this card works for me.  I have Cal, Sr. and Cal, Jr. on baseballs.  I don't have Bill on one, either, but that shouldn't take me much longer.  Ryan is still in the Nationals system, after being drafted in the 15th round of the 2014 draft out of a Junior College in Florida.

He is scuffling so far in his MiLB career, with a .203 batting average, 3 homers and 47 RBI over 141 minor league games across 3 seasons in Rookie League, Low A and A ball.  I doubt he will pan out much more than having a famous last name, but at 23, he is still fairly young.  I was initally disappointed that he wasn't drafted by the O's (he was drafted by them in 2012 out of high school, but didn't sign), but he probably stands a better chance in DC and not living up to his dad's shadow in Baltimore.

So, I kind of wish I had waited to pick this card up out of the bargain bin, but $20 is still not bad, especially in the grand scheme of things.
Posted by William Regenthal at 5:37 PM