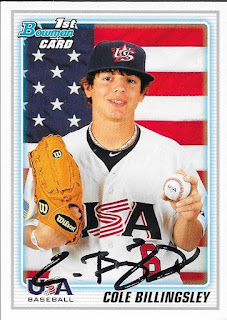 I finally sent off a card to an Orioles minor league affiliate to try to get a TTM success.  I figured that since I had 4 of these 2010 Bowman Cole Billingsley cards, I would see if I could get one signed.  You may remember that I bought a whole stack of the 2010 Bowman Team USA 18U cards out of a dime box at the 2012 National.  I was able to sell a few Albert Almoras and Alex Bregmans, but I kept the Cole Billingsleys (and some of the other guys) to see if any of them would some day make the majors.  Luckily, Billingsley was drafted by the Orioles this year, and is now playing at Single A Short Season Aberdeen this year.  As of last night he is batting .281 with 3 home runs and 15 RBI.  He will probably be shut down once Aberdeen's season ends, as I did not see him listed as one of the O's headed to the Arizona Fall League.

I mailed to Billingsley on June 30 and got the card back on August 8 for a 39-day TAT.  I mailed to Ripken Stadium.
Posted by William Regenthal at 7:56 PM