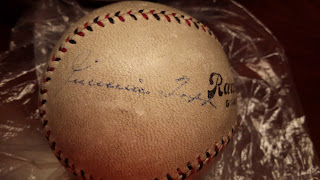 I finally was able to add the Hall of Fame baseball that I have coveted the most.  I got Jimmie Foxx.  A full JSA LOA included from a very reputable dealer, I am so excited to announce this as my 123rd Hall of Famer.

I came to the National this year with a plan in mind if I found a Foxx that I liked at a reasonable price.  I also enjoyed chatting with the seller of the ball.  We spoke for a while about Hall of Famers, about my meeting with Mr. Don McNair, who's dad played alongside Foxx, and collecting in general.

I made up my mind to purchase the ball, but saw that it had no LOA to go with it, so the seller took it to JSA and had them issue an LOA, all of this he did for free.  I made the purchase yesterday, and picked the ball up around lunchtime today, once the LOA was completed.

I had a good laugh with the seller this morning.  He asked me to come sit by him while one of his staff went to check on the LOA.  I had asked him if he was having a a good show, to which he replied: "Oh man, I killed it yesterday.  I found some sucker to buy this Jimmie Foxx ball off of me.  I killed it!"  Then he slapped me on the shoulder and we had a good laugh together.  I really enjoyed buying from him, Kevin Keating, and definitely will again.  I was really nervous about the purchase, but he made it really easy on me.  He even gave me a bit of a break on the price.  It is a huge purchase, but I see it as an investment.  Foxx obviously isn't signing anymore, and I have wanted one for years.  Now I have one, and couldn't be happier.

Foxx was elected to the Hall of Fame in 1951 by the BBWAA with 79.2% of the vote (really?).  He had appeared on 8 ballots, back when the voting was far different than it is today.