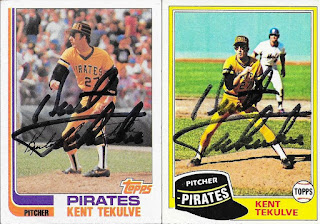 It has been a while since I have gotten TTM successes on a regular basis, but some trickle in here and there.  I think I have two others, aside from this one, that I still need to post.

I mailed to Kent Tekulve on April 20 of this year, and got back three of the five cards that I sent.  He kept the 1977 and 1983 Topps that I sent.  No big deal.  He signed the cards in sharpie, one that was about to give out, but the cards still turned out ok.  The cards came back on August 8, for a 110-day TAT. 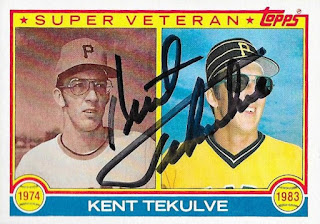 This 1983 Topps Super Veterans card might be my favorite of the bunch.  I like being able to get some different types of cards signed TTM, and these are really nice ones to try to go for.

Posted by William Regenthal at 10:29 AM