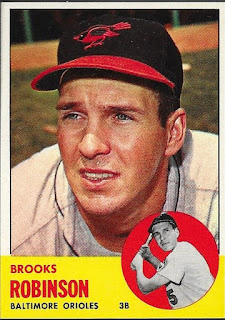 I'm kind of bouncing around with my posts about the National card show, but I wanted to get this card on the blog and off of my desk.  Not because it is in the way or I am tired of looking at it.  No, I want to put it away safely until next year's show because I believe I will take this to PSA for grading.  The card is virtually flawless in my mind.  Usually when I see vintage cards like this, they have surface wear, or a dinged corner.  There are no slight creases or wrinkles on this card.  The surface gloss is still there, even 53 years after the fact.  This really is a sharp card.

To say I was disappointed when I first got the card is an understatement.  I was happy to complete a deal, but I felt like I messed up big time prior to the deal,  but in the end, I am glad I sat down and really looked closely at the card.

I had met up in person with my good friends Kyle and Jordan at the show.  Both of them are guys I have befriended on Instagram right at the beginning of my time there.  Kyle was the first successful deal that I made, and Jordan is his best friend.  We all hit it off and have been good friends ever since.  Kyle was interested in a Brendan Rogers card that I had, and offered up the Brooks.

I had gotten the Rogers when my friend, Robert, traded my 2016 Bowman Rogers auto that we had raw card graded at Beckett.  It got a 9-10, and I let Robert trade it for me, since he was flipping his graded stuff for crazy deals.  He flipped that Rogers for a... Brendan Rogers auto.  This one was a 2015 Bowman's Best RC auto.  Robert felt like he got a good deal, and I couldn't blame him, since it was a RC auto, but I had been hoping for something better, like an Oriole.  So, Kyle said he was interested in the Rogers and offered the Brooks.  Since it was a Brooks, and since Kyle is such a good friend, I had to let him have the deal.  I felt like he got the better end of the deal, since I already had a 63 Brooks.  I took the card, put it in my box and forgot about it until Andrew and I were looking at cards a few days later.

I noticed, then, that the Brooks that Kyle had traded to me was in such amazing shape.  I had spent a good deal of time at the show shopping around for a graded vintage card for a friend and came to realize just how tough it is to get a high grade on vintage.  I also learned about the huge difference in quality and price between grades.  A 6 goes for a fraction of a 7 which goes for a fraction of an 8.  I think this card would bring a pretty high grade, even with its centering.

So, all of that being said, thank you so much for the trade, Kyle.  Also, thanks for sticking with me all of these years.  It was great to finally meet you in person and even better walking around the show for a bit with you and Jordan and talking about cards.
Posted by William Regenthal at 9:46 PM