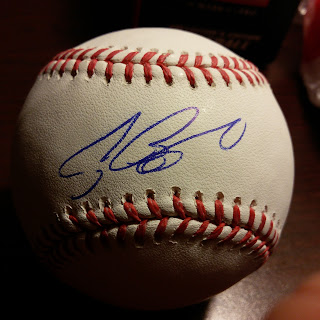 When the signer list for this year's National came out, I wanted to get as many Hall of Famers that I needed for the collection as I could.  After looking at the prices, I decided that I probably ought to stick with maybe only one, instead.  You know, since Pedro, Piazza, et al, all went for north of $100 each.

Instead, I chose one guy I needed, and also got a voucher for a guy I think will be in the Hall later on (and who will be blogged later).  I chose Craig Biggio over some of the other guys that I needed, not only because his price was the most affordable, but also because my friends and I have a nice running joke about what we think his signature looks like.  I will leave it to your imagination, but "something on a skateboard" will get you pretty close...

Biggio was really nice, in the brief moment that Andrew and I talked to him.  I am disappointed to note that the photo I took of Andrew and Biggio turned out blurry as crap (thanks cell phone camera).  Sorry, Andrew.