Jonathan Schoop Pickups From The National 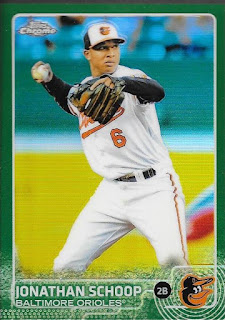 A National Card Show wouldn't be complete without my picking up Jonathan Schoop cards dirt cheap.  I have continued to take advantage of him being grossly underrated, which is fine, since I can get some really nice stuff of his.

This year, I picked up some great parallels and a couple autos.  The above green refractor from 2015 Topps Chrome is numbered 7/99 and came out of a dollar box.  It was cheaper than a dollar because I got a bulk deal on it, so that made it even better. 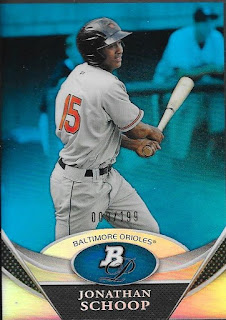 This 2011 Bowman Platinum blue parallel was also in a dollar box.  Even worse, it was unsleeved, just floating around loose in the box.  It is numbered 9/199 and now resides in a penny sleeve and top loader. 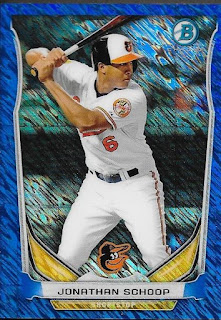 This 2014 Bowman Chrome Mini blue parallel is numbered 112/250.  It was ALSO in a dollar box and was floating around loose. 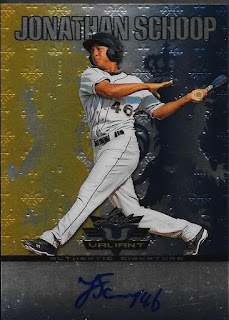 I don't remember what I paid for this 2011 Leaf Valiant Schoop auto, but I believe it was in a $5.00 box.  Not too bad for a nice auto.  This is a cool-looking card that definitely looks better in person.  It didn't scan all that well. 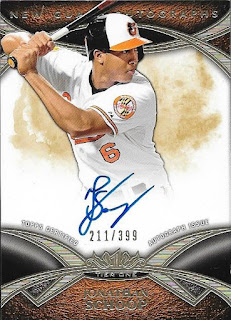 Schoop is having a great season for the Orioles. batting .282 with 20 homers through 127 games.  He has been a solid piece for the Orioles and could very well top out at more than 30 home runs this year.  I believe Schoop will have a few big moments for the O's down the stretch.
Posted by William Regenthal at 5:52 PM