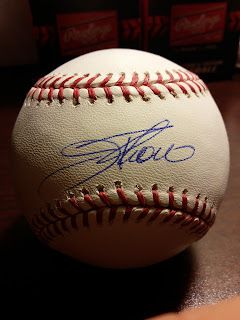 I believe the last transaction I made at the National was pairing up a Joe Torre signed baseball with this Jim Thome ball for a great deal ($125, I believe).  I had seen Thome balls at the show going for $125 alone, so, essentially, I got the Torre for free.

I have wanted a Thome ball for some time now, especially since I was right beside him twice at Camden Yards (back when he played for the Twins), but couldn't get him to sign.  I was running around the National during the final minutes of the show looking for a vendor who had cheap Vladimir Guerrero balls, but I found the guy with Torre and Thome instead.  Adding the Hall of Famer (Torre) cheaply won out over Vladdy.