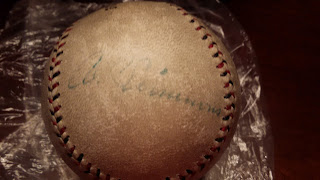 Not to be lost with the excitement of Jimmie Foxx, there was another Hall of Famer on my ball that I purchased at the National.  Al Simmons is one of those players from that era that is known only to die hard baseball fans.  Yet, he is a Hall of Famer, and a very tough one to get on a baseball.