Joey Rickard Pickups From The National 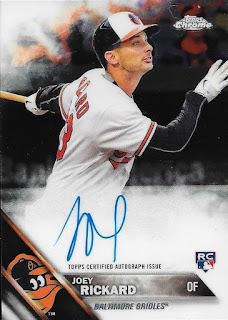 It seems that every year, the Orioles are able to find usable pieces in the December Rule V Draft.  Ever since they were able to pick Ryan Flaherty up in the 2011 version, they have been active in the draft and have been able to keep the guys they have picked.  They were able to stash T. J. McFarland and Jason Garcia on the roster and now they remain in the organization (although, McFarland was designated for assignment today to make room for the return of Tommy Hunter.

I didn't think too much this year when the Orioles added a Rays far hand to the roster via the draft, but based on his strong spring, Joey Rickard really raised some eyebrows. 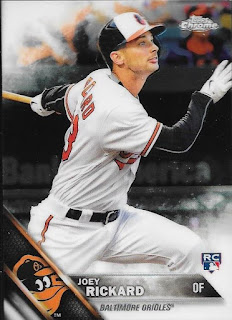 Rickard made the Orioles Opening Day roster out of Spring Training, and performed strongly over the early part of the season.  He came back down to Earth, then was sidelined with a thumb injury that has put him out until mid-September. 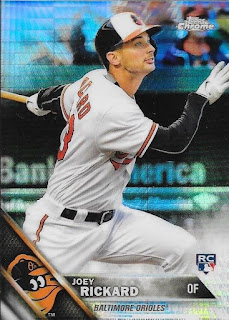 Rickard has already endeared himself to many O's fans.  He's young (25), has some speed, and has been getting on base.  Currently, he has a .268 batting average with 5 home runs over the course of 85 games.  When he gets back to the active roster, I believe he will be an important table setter for a team that desperately is trying to make the playoffs.

I picked up these Chrome cards at various vendors at the National.  They are Rickard's first Topps offerings, and they look great.  I got his auto at the top of the page for around $10, and the other two cards (his base chrome, and the prism refractor) were in dime boxes.
Posted by William Regenthal at 5:59 PM