Finally, After All These Years... 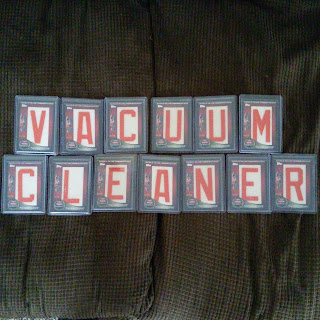 I have been waiting for seven years to write this blog post.  When 2009 Topps Series 2 came out, the one and only Pete from Dropped Third Strike suggested that I try to complete the series.  On June 13, 2009, I posted that I picked up two Us and an N.  Pete had a C that he ended up sending to me.  So, it actually took me seven years and two months to complete the series.  By my calculations, since each card is numbered to 50, and you need two of the Us, two As and two Cs, only 25 of these sets can be completed.  So, essentially, this set is a 1/25.  I am pretty proud that I have finally finished it.

I looked a three different National Card Shows to complete the series, with no luck at all.  The closest I came was this year, when I found a vendor with maybe 15 of the letters from various series, but the only Brooks he had was the C.  I thought I was smart back in the day when I added the search on Ebay as a "followed" search, only to be teased by the occasional L or E.  Finally, last week, the followed search paid off when someone listed several of the letters at once.

I had been waiting so long to finish this set, I was willing to pay almost any price to complete it.  Luckily, when I saw the R go up for sale, it was $10.00 BIN with free shipping.  So, I got it for a lot cheaper than most of the letters, which I paid between $15-$25 per letter (a couple were as low as $7, I think).

So, I can now turn off the Ebay notifications.  I can now stop searching through manufactured patches at card shows.  I am officially taken out of the market for these letter patches.

The original post that started this project can be seen HERE.
Posted by William Regenthal at 5:51 PM