Orioles Prospect Pickups From The National 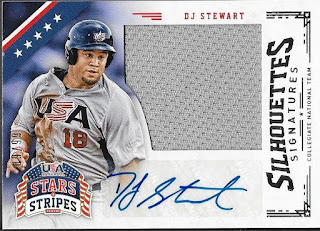 As the Orioles crap the bed on this season, now is as good a time as any to look toward the future.  While I was at the National, I utilized the bargain boxes to add some O's "prospects" to my collection.  The above DJ Stewart jumbo relic/auto cost me less than $5.00, but is a pretty cool card.  Stewart hasn't really lived up to his "first round draft pick" billing, but since his promotion from Low A Delmarva to High A Frederick, Stewart's batting average has picked up by 42 points from .230 to .272.  He had 4 homers at Delmarva this year, coupled with another 4 at Frederick.  He should develop more power, but that remains to be seen.  So far, Stewart appears to be far away from reaching the Majors, but one can still hope.  The kid is only 22, so hopefully he can continue to improve. 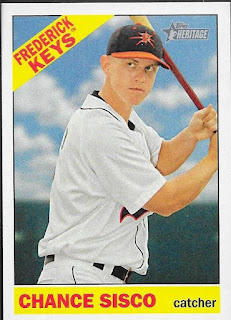 This Chance Sisco was a dine box find.  Sisco might be the top Orioles prospect, and may see playing time in the majors next year.  He is only 22, but holds a .322 career average over 4 minor league seasons.  The Orioles desperately need a high average player who can get on base.  Compared to the dismal .230 average that Matt Wieters is showing this season, Sisco may be an upgrade over the former phenom.  Sisco isn't regarded as a plus defender, but Wieters seems to have regressed defensively somewhat, and has always been suspect as his game-calling.  I look forward to seeing what Sisco can do, but I doubt he gets a call up in September.  We may have to wait to see how he performs in Spring Training 2017.  By then, Wieters may likely be gone. 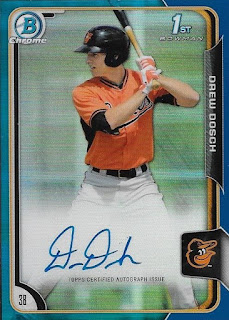 24 year-old Drew Dosch is batting .256 with an OBP of .306 at AA Bowie this season.  He has 7 homers and has struck out 87 times.  He was a 7th round pick in 2013 and hopefully will continue to move up in the O's system.  He's a third baseman who has Manny Machado to look up at in the depth chart for a couple more seasons before Manny leaves via free agency.  I got this card for less than $5 out of a bargain box.  This 2015 Bowman Chrome blue refractor auto is numbered 28/150. 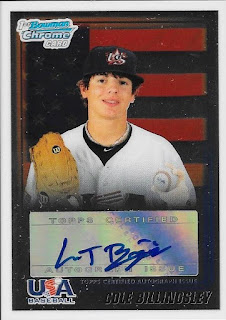 I was excited to find this Cole Billingsley auto in a bargain box for $3.00.  He is currently at Short Season (A) Aberdeen and is batting .283 with 3 homers over the course of 46 games.  Not bad for his first season of pro ball.  I look forward to following Billingsley's career as he rises through the ranks.  Hopefully he will make the majors, which would be really cool for a kid featured on a 2010 Bowman card at the age of 16. 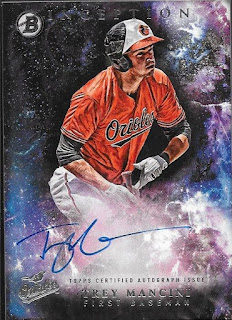 Finally, we have a 2016 Bowman Inception Trey Mancini auto that I picked up for less than $15.  I love these cards.  My buddy Robert busted two cases of Inception and actually pulled this same card.  I wanted to get it from him, but he sold it before I had a chance to make an offer.  Oh well.  This card is not numbered,  but the auto is on-card.

Mancini sports a .306 average across 4 minor league seasons.  He was promoted to AAA Norfolk, a notoriously unfriendly park for hitters' stats, but has batted a respectable .279 with 13 home runs over 118 games.  Mancini stands a chance to be called up when rosters expand on September 1.  If anything, he must be added to the Orioles 40-man roster this off season, or they risk exposing him to the Rule V Draft (where any team can draft him for the price of $50,000, but must keep him on their 25-man roster, or offer him back to the O's for $25,000).  It is a no-brainer that Mancini is added to the 40-man no later than the off season.
Posted by William Regenthal at 6:13 PM