Nolan Gets a Topps Now Card 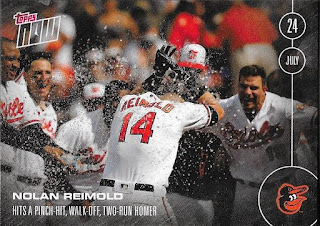 I had hoped that when the Topps Now concept was coming about, I would end up with a few from this season that showed my favorite players and some awesome moments for the Orioles.  Well, I got my wish when Nolan Reimold cranked a walkoff home run on July 24.  The O's were able to defeat the Indians, and Nolan was able to be the hero.

I ordered the 5-card deal when they were announced the next day, and promptly messaged Nolan's wife, Jenny, about them.  She had no idea that Topps was doing this, so I was glad to let her in on it.  Unfortunately, she was busy the day they were available and forgot about them.  Not to worry, though, I ordered the 5-pack for a reason.  I made sure to send her one, when they finally arrived (after I got home from the National).

Nolan has had a rough go as of late, but I'm thinking he will be able to turn it up for the stretch run.  He is still a very good player and one that I definitely would love to see in a big at bat during the playoffs.  He deserves it, after all that he has been through the last several years.

I (obviously) still keep in touch with Jenny.  She is always helping me out and is always adding to my Nolan PC.  She also still reads this blog, when she finds the time.  I will always appreciate the help she has given me, and I was more than happy to pick up one of the Topps Now cards for her.
Posted by William Regenthal at 5:40 PM