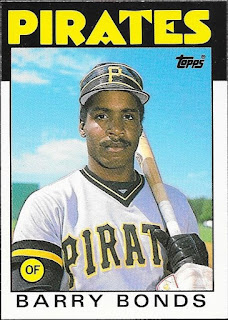 Here's a little something different.  During my trip to the National this year, I tried to find some good deals on cards in the dollar, 5 dollar, etc boxes.  One box I looked through had a bunch of rookie cards from the mid-80s at severely reduced prices.  I regret not picking up more of the rookies that I found, but one that I saw jumped right in my pile once I saw it.

I have never owned this 1986 Topps Traded Barry Bonds, so I was really happy that I saw it for $3.00 at the show.  I bundled it with a stack of other cards, so I paid a lot less than $3.00.  I really enjoy the 1986 set, and already had the Bo Jackson from 1986 Topps Traded.  I will put this in a brand new top loader and store it with my other rookies.  I know the card is nowhere near worth what it used to be back in the early 90s, but it is still cool that I got one of these for a good price.

I still have a huge stack of cards from the show (not to mention several signed baseballs as well) that I need to post.  I think National posts may very well get me through the season into the off-season, to where I can start up some TTMs again, among some other projects.
Posted by William Regenthal at 6:21 PM