The Other Signature on the Foxx Ball - George Earnshaw 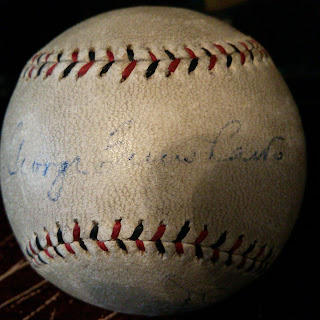 I believe I mentioned earlier that there were three signatures on my Jimmie Foxx baseball.  Along with Hall of Famers Foxx and Al Simmons, George Earnshaw's signature graces the sweet spot of the baseball.

If this baseball was signed while the players were still active, that might put is an era from 1928 to 1933 since by 1928, all three players were on the A's, until Simmons left in 1933.  It would be really cool if it was from that time period.  It has to be from at least 1956, since that is the year that Simmons passed away.  Regardless, I have an amazing baseball, and piece of history on my hands.
Posted by William Regenthal at 10:43 PM