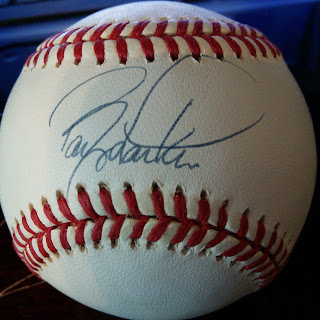 The National Card Show afforded me an opportunity to add five Hall of Famers to my baseball collection, and a couple others who should be enshrined sooner, rather than later.  For a good deal on Saturday, I added Barry Larkin as my 125th Hall of Famer.

The ball is JSA authenticated and is a William White ONL baseball.  The dealer gave me $5 off the price, which is decent enough, I guess.  I have been wanting to knock Larkin off of my list for some time now, even though, in my humble opinion, I don't feel as if he is a surefire Hall of Famer.  That being said, however, there are guys who aren't in that I believe should be, but others could have an argument against them.  It creates a good field for debate, though.

Larkin making the Hall of Fame as a shortstop, I guess paves the way for someone like Omar Vizquel to get in.  I just don't feel as if Larkin has the stats, but compared to other shortstops not named Cal, he probably does measure up.
Posted by William Regenthal at 10:56 AM